If you think that manual leveling your bed is a real pain each time you start printing (and particularly if you have a removeable magnetic print bed), then adding a BLTouch sensor will likely save you a ton of times and freedom of mind.

Here's a tutorial about how to do it for the Sapphire Plus printer.

This video is useful to understand what we'll do:

This depends on the hotend you have installed. It can be as simple as this: BLTouch mount by TwoTrees

Or, if you have updated your printer to use a E3D hotend, you'll find the piece to print in PETG here.

Sapphire Plus connection holes are kind of stupid. The mainboard is in front of you, yet they've preferred to dig a hole at the back of the printer so that wire need to go to the back then to the front in the bottom chassis. In the end, the required wire's length is too long to fit the provided wire extension in the delivered BLTouch sensor so you need to cut and add something like one meter of additional cable. Not sure it's good for the signal, so I've twisted these wires hopefully making them less prone to noise.

Beware about the mistake I made initially: the other endstop are simple switch, so they are plugged with the black wire on the left so you might think that the ground pin is on the left of the connector: It's not!

So, when I plugged mine this way, I made a mistake: 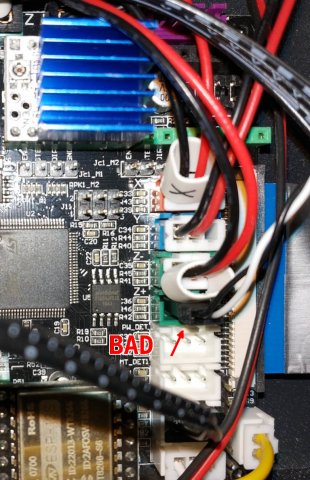 The black wire should be the center pin (so it should have read: White Black, and not Black White).

Ok, now you've wired the sensor correctly, you need to test it. Without powering the printer up, and with a multimeter, ensure you've a connection between the GND of the mainboard and the two G pin on the BLTouch. Then power on the printer and ensure you have 5V on the 5V pin of the BLTouch.

If it does not show the expected tension, power off and double check the connections.

This part is the most complex in the installation, you'll need to rebuild a Marlin's firmware for your printer by including the BLTouch in the configuration. I'm describing how to build a new firmware here (soon).

The BLTouch communication protocol is strange. They use a servo command as the communication layer, so there's only few command you can send to the sensor, and they are based on the virtual "orientation" of the servo.

To send command to the sensor, you'll need to emit servo command via the G-Code console in Marlin (my PR was accepted and will be available in version 2.0.8).

The available angles are:

You can then calibrate your system.

Step 5.1: Finding the X/Y offset from the nozzle to the sensor's pin

This part is quite easy, you'll need a sheet of paper.

Although the previous steps gave you a Z-offset, it's not precise (what's the point to have a precise probe if we use an imprecise offset here?) So you'll need to perform a manual Z calibration, and I promise, you will only need to do this once. This is to globally level the bed.

The step by step is as usual for manual calibration:

Once all those steps are done, we can calibrate the probe Z-offset:

To test your setup is working, you can select the AutoLeveling command in the printer's menu. It should move to a corner, deploy a probe, move the another corner, deploy the probe and so on. If it finished probing the complete bed, you're done, congratulations!

If it stops midway, you'll need to run the command G29 in a serial terminal to watch the error message and, hopefully find out what went wrong.

The printer probes outside of the bed, or crash on a side

You've probably inverted the Y-offset (or X-offset). Negate the offset in the menu and retry

The probe deploy on the first corner but stops here

The Z-offset is not correct, so it waits to be triggered, but the printer already reached the Z-0 position. Either move the Z stop sensor up a bit so the bed can trigger the probe while going up (make sure the bed is not crashing into the nozzle here) or move the BLTouch mount down (unscrew the mount, slide the BLTouch sensor down a bit and retry). You'll need to re-calibrate the Z-offset again

The probe is blinking in red

The probe has triggered an alarm. If it happens while it's not touching the bed, something is wrong in the wiring here.