I've decided to buy this 3D printer because it looked strong and solid and well designed. I'm not going to copy all the caracteristics for this printer here, as you'll probably find a lot more on the original manufacturer website.

You'll find below my honest review that isn't influenced by anyone but my own experience with this printer.

A new kit in town

This printer is delivered as a kit you must assemble yourself. They provide a manual printed in glossy paper, but without good instructions (pictures are too small to see the important details and they skip difficult part because, well, it's difficult to explain well). Once assembled (see my other posts for few advices to help you build the printer), it's very strong and clean.

They have managed to provide a really prosumer product within a budget. Unfortunately, building the printer takes a lot of time, even more if you are a bit maniac (like me).

There are many details missing in the manual that you might have to unscrew everything at step 9 to resume at step 2. You'll probably make mistakes, so to save you some time, please follow my other post for the mistakes to avoid.

There are many reviews of this printer online, and some are very good like this one from 3dprintbeginner, so I won't repeat his points. 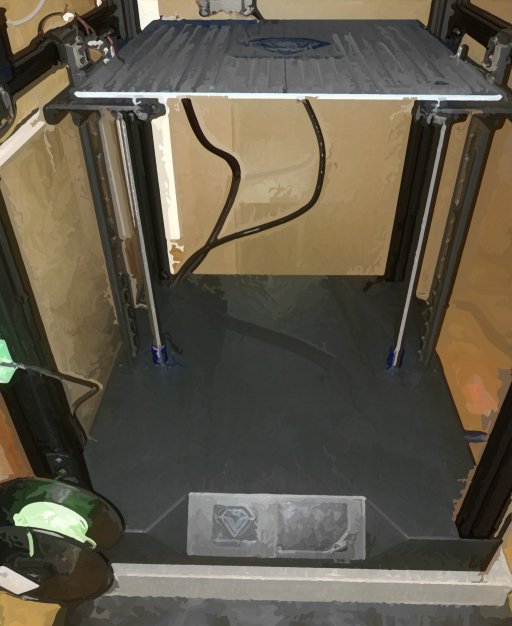 The frame is very strong and clean. Once built, you have minimal wire going out so it does not look like a prototype. Large build area with maximized space

The wire are way too long and very badly though. It'll take you half an hour to fit them in the wire holder and you'll have to deal with sliding them into the cable trays in the chassis. If you need to change something later on (like the hotend or adding a BLTouch sensor), you'll end up having to cut and solder additional wire (up to 1 meters missing).

Why did they use this path:

And not this path?

I've reworked this to a more logical system here with a detachable hotend.

Also the filament spool holder is square. When the extruder is pulling the filament, we see the spool jumping from back to forth because it does not roll correctly on a flat surface, causing a lot more tension than required (and wasting a lot of force on the extruder). So print a round spool holder as soon as possible to avoid breaking/exhausting your extruder early.

First of all, I would like to specify that there are 2 versions of this printer and that, obviously, it is the second version that is delivered now (with the same reference). The version tested here has two Z axes driven by two motors connected to the same A4988 current driver and which are synchronized by a belt. The second version does not contain the belt, the two motors are independent and there are therefore 2 limit switches for each motor. Moreover, the second motor is connected to the driver of the second extruder (so you will not be able to install a second extruder later).

This second version only brings problems, so I don't recommend this printer anymore until they (TwoTree) go back to the previous version. Indeed, they did not send their changes in Marlin, which forbids any update of the firmware with a more recent version, any modification (addition of a BLTouch, Neopixels, etc...). In short, you will have exactly the original (buggy) firmware until the printer is scrapped. As TwoTree is bad for the software aspect, this completely devalues the interest of this printer.

For the version I presented here, I modified a lot of things on this printer like the installation of a magnetic plate, essential to use, the displacement of the elements so that we can close the cube and print ABS, the detachable print head, the control by WIFI, etc... I'm not unhappy with this printer, for the price you have a solid base to build the ideal printer. But it means a lot of hours of tinkering, disassembling, reassembling. Depending on your goal, this is not necessarily what you are looking for.

I also have a Creality that works directly without modifications, but it provides a much lower quality print than this one. I admit to using the Creality when I have a quick need to print (broken part, clips...) because it is busy with my modifications.