Replacing a lead acid by a Lithium Iron Phosphate battery

If you own a lead acid battery in your motorhome, like many of us do, at some point in time, you'll have to replace it (usually, every 2 to 4 years depending on the usage of the vehicle). While it's tempting not to change anything, lead acid batteries are expensive to use (yes, compared to Lithium battery, if you account for actual usage cost) and have many painful cons.

Ok, so I've convinced you to upgrade your lead battery to a lithium one. What are the steps required to install one ?

First, you must make sure about what needs to be changed in your motorhome. If you are starting from scratch, it's might be easier (see below). In a typical electrical installation in a motorhome, you'll find:

Can I just swap both batteries ?

Lead charging cycle is different from Lithium. Lead charging requires a voltage of 14.2V/14.4V for a small amount of time (constant voltage phase) and then need less for the constant current phase and the floating phase at 13.6V. Lithium on the opposite need a constant 14.4/14.6V while monitoring the current since, for lithium, the voltage almost never change until the battery is depleted.

It'll appear to work, since the LiFePo4 batteries have a BMS (battery management system), but they'll never reach a complete charge, and depending on the charger, you'll likely burn the charger since it'll either never reach the constant current phase, heating up out of spec, or will become a current sink if it enters the floating phase (the battery voltage is higher than the floating voltage, the current will flow in reverse). If it's doing desulfation (a good lead acid charger should do that regularly), it'll also risk breaking the BMS.

First, identify in your motorhome's technical documentation if the AC/DC charger and the DC distribution box can both support lithium battery (with a switch or by programming it differently). If it's the case, it might be as simple as changing the switch position, swapping the batteries and be done. Unfortunately, most AC/DC charger installed up to 2018 are lead acid only.

If you have a Nord Electronica or CBE system where the AC/DC charger is separated from the DC distribution box, the solution is quite simple (see below). You'll have to identify the relay that's connecting the truck start battery (called starter) to the main battery and remove it. You must remove it or disable it, since if this relay triggers, it'll connect both positive (and ground) poles of the batteries and the lithium battery will instantly try to discharge in the starter battery (likely lead battery) and kill it or burn the wires. Since the lithium battery has a higher voltage than the lead battery, a huge current will flow to the lead battery until it's equalized. The wires between both batteries aren't made for such current (that can be 2C for some lithium battery, so likely 200A for a 100Ah) so you'll have a problem.

The relay is used usually so that the truck generator can also charge the main battery. In our installation, we'll use another system for this that's more efficient, so it's perfectly fine to disable it.

On CBE system, disabling the relay is done by removing a pass-through resistor (see the manual for locating it) so it's very simple.

On Nord Electronica system, it's a bit more complex, you'll likely need to de-solder the relay that's between J1 and J2 (again, check the manual for locating the relay)

If you have a Calira system, they combine the AC/DC charger with the distribution box. It's the same PCB for both so it's almost impossible to disable the charging feature (that's lead battery only) and in that case, it's unfortunate that you'll need to change the distribution box and the control panel.

You'll then remove the AC/DC charger (you don't need it anymore), and if you follow the diagram below, you'll also remove the solar charger. That's 1 to 2kg saved!

You'll need to check the diameter of wires between your truck and the main battery. The shorter diameter is what you are looking for (if, for example, you have an AWG 8 wire going from the truck battery to some switch and from them, you only have a AWG 10 wire to the battery, the diameter to account for it AWG 10).

For convenience, here's a table of external diameter (what you'll measure with a caliper) to the wire dimension and the absolute maximum current it could handle (better to take some margin here):

Here's some installation diagram after the lithium battery is installed. 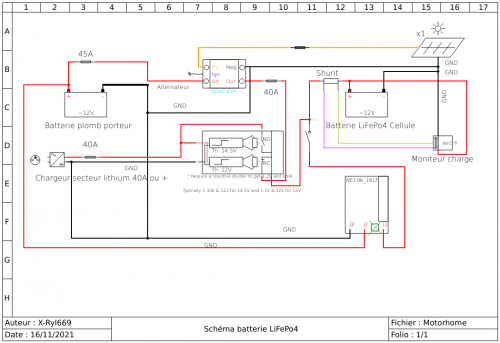 This installation is made for 6mm2 wires and Nord Electronica system. The Relay RE1 must be removed.

The threshold circuit is using off the shelf module with this schematic: 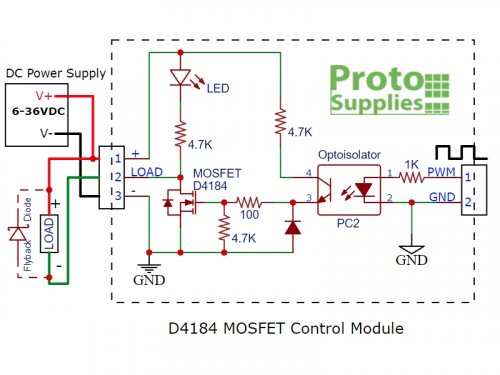 The optocoupler used is a PC817X model with a threshold voltage of 1.2V.